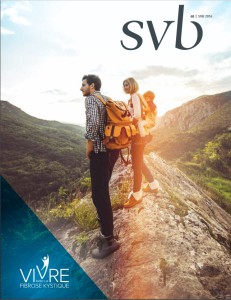 The world belongs to optimists, pessimists are only spectators
– François Guizot

It is with renewed pleasure this year, as it has been for the past 30 years now, that we send you the SVB, our annual publication. Without a doubt, 2015 was a pivotal year in the world of cystic fibrosis. We began the year by learning that the median survival age was 51 years, we ended it by reaching a record of lung transplants in Quebec. This year, more than 57 people underwent lung transplant surgery at the Notre-Dame hospital, in Montreal. Both these aspects were incredible advances!

On October 17th, we celebrated our 30th anniversary. Over the past 30 years we developped a unique organisation. We now live longer and better than ever. Better because people living with CF in Quebec gave themselves an organisation that protects their interests and promotes good habits and forwards useful and trustworthee information to the community. We’ve built links with many national partners like the Fondation l’air d’aller and Fibrose kystique Québec in order to have accessible programs and projects specifically built for us. We have even built relations with organisation from other countries to share knowledge of how to live with CF around the world. Well served by research and the healthcare system which takes charge of us in almost all aspects of our lives, we can count on an ever present psychosocial support.

However, 2015 was not perfect in the healthcare world in Quebec. This year was rough on everyone, and important changes occurred.

Even though Quebecers with CF can count themselves as being amongst the most privileged in the health care system, 2015 was a dire year for our healthcare system and social services. Budget cuts have taken their toll over the years. In December, thanks to the National Report on Incidents and Accidents Occurring During Healthcare Acts, we learned that 316 people died in hospital in 2015 because of falls and medication errors. It should also be noted that fusions imposed by Bill 10 forced administrators to take care of many departments at the same time, don’t allowing them to take the time to well understand their departments and correct problems.

We like to think about what we have gained during the last decades, and that everything is owed to us. However, it is imperative to remain vigilant in order to protect our gains. For example, free access to in vitro fertilization was lost to most of us without warning.

In such a context, it is indispensable for us to thank all the doctors, nurses, social workers, psychologists and other interveners from the bottom of our hearts. Every day, they have taken care of us and accomplished miracles.

The 2016 edition of the SVB carries hope, but remains realistic. We live longer, and thus we require more support. The new transplant recipients cannot escape this reality, as you will see in the following pages. Solutions will have to be found to give even more hope to those who have gone through this harsh period of their lives and allow them to live their dreams.

Living with Cystic Fibrosis will face many challenges in the following years. Thanks to the implication of many, we have realised our mission against impossible odds. An old African proverb says that alone we travel faster, but together we travel further. That is exactly what all of us, together, have accomplished. Sometimes slow, but concrete and efficient realisations.

Our healthcare system and social safety net are a legacy that Quebecers built for themselves because we believe that everyone deserves a good quality of life no matter their origins, skin color or social standing.

Our organisation is the gift that we gave each other was Quebecers living with CF. It is unique in the world, and thus even more of a precious gift.